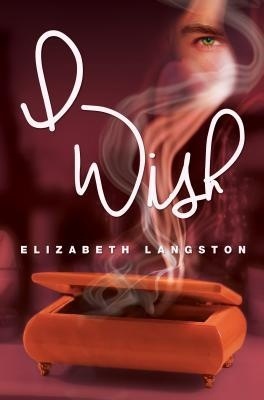 What Lacey needs is a miracle. What she gets is a genie with rules.

Lacey Linden is hiding the truth of her life—a depressed mom, a crumbling house, and bills too big to pay. While her high school classmates see a girl with a ready smile and good grades, Lacey spends her evenings seeking ways to save her family. On a get-cash-quick trip to the flea market, Lacey stumbles over a music box that seemingly begs her to take it home. She does, only to find it is inhabited by a gorgeous “genie.” He offers her a month of wishes, one per day, but there’s a catch. Each wish must be humanly possible.

Grant belongs to a league of supernatural beings, dedicated to serving humans in need. After two years of fulfilling the boring wishes of conventional teens, he is one assignment away from promotion to a challenging new role with more daring cases. Yet his month with Lacey is everything that he expects and nothing like he imagines. Lacey and Grant soon discover that the most difficult task of all might be saying goodbye.
Links:
Goodreads | Amazon | Barnes & Noble

About the Author:
Elizabeth Langston lives in North Carolina, halfway between the beaches and the mountains. She has two teen-ish daughters and one husband (a geek like her). When she’s not writing software or stories, Elizabeth loves to travel with her family, watch dance reality TV shows, and dream about which restaurant ought to get their business that night.
Elizabeth’s debut novel WHISPER FALLS released in November 2013. Its sequels, A WHISPER IN TIME released in April 2014 and WHISPERS FROM THE PAST released in October 2014. Her new series begins with I WISH in November 2014. Learn more about her at http://www.elizabethlangston.net.
Author Links:
Goodreads | Twitter | Facebook | Blog | Website

Today Elizabeth is going to tell us how she comes up with names for her characters.

Picking names for characters in a book is a tough thing to do, especially since I try to avoid the names of people I know. I don’t want them to think that I’m basing a character on them.

I Wish, however, is full of characters named for specific people. (I doubt I ever do that again.) Here are the names and why I chose them.

Grant – Originally, I named my genie Grant for a weird reason. Genies “grant” wishes. It was just a place-holder until I learned him better and figured out what his name should be. But a couple of things convinced me to keep it. A friend of mine has a son named Grant, and he is really cute and nice. (I hope neither of them read this. 🙂 Then I looked up the meaning of the name and discovered that Grant means “great”. It was a perfect fit for the hero of I WISH.

Lacey – In my first draft of the book, the heroine’s name was Molly. But it never quite felt right. My heroine was determined, fiercely independent, and intensely loyal to the people she loved. That profile described my grandmother. So I renamed my heroine after Grandmother Lacey, and that felt exactly right.

Henry – I named Lacey’s brother after Prince Henry of Wales. Just because.

Eli – Lacey’s friend (and Henry’s soccer coach) is named after Eli Manning, the quarterback for the New York Giants. I received my undergraduate degree from the University of Mississippi. The Manning family is practically royalty for Ole Miss alumni. (And, yes, I use the name Peyton in another book.)

Kimberley – Lacey’s best friend started life as Adriana. But I ended up not liking the character, so I completely rewrote her. When I did, I needed a new name. About this same time, the receptionist at my family physician’s office asked me to name a character after her, and there you go. We had our Kimberley.

Crystal – On the Social Security Administration’s “popular baby names” website (http://www.ssa.gov/OACT/babynames/ ), I asked it to give me the Top 25 names for the year 1977 (approximately when Lacey’s mom would’ve been born.) Name #25 is Crystal.

Sara & Sean – the twins are named after my great-grandmother Sarah (but I dropped the “h”) and my nephew-in-law Sean (but an entirely different spelling.)

Finally, I’ll mention two very minor characters, Charlie and Norah. Those names will appear somewhere in every book series that I will ever write. Charlie was my nephew. Norah was my boss’s daughter. Both left us way too young. Charlie died at age 4; Norah, age 6. It’s just my little effort to honor their memories.