Please welcome the super awesome, fabulous author of Lust, Sex and Tattoos on my blog. First let’s take a look at the sexy cover.

When did you first realize you wanted to be a writer?
I started writing stories when I was a kid in grade school. I always wrote in some shape or form since then. It wasn’t until I was in my early 30s that I even thought of becoming published. It was a gentle nudge from a friend who gave me the courage to submit those first stories.
How long does it take you to write a book?
Well that depends on the books. Shorts and novellas only take a month, then some time for editing. Novels take me at least three months, sometimes more. Depends on the story and on the muse at the time. That’s why I always have more than on story going at once. If one is being stubborn I can work on another.
What is your work schedule like when you’re writing?
Now that I work at home I try to make my writing schedule fit my husband’s work schedule. That means I don’t start my work day until about 11:15 when he leaves for work. I start off by doing some art or jewelry (my side business) and then tackle emails, marketing, and the like until a late lunch. After lunch is when I truly begin writing. I would say I try to write from 2:30 in the afternoon until about 7:00 when I break to make some dinner. Then I get another hour and a half in before the husband gets home. Then it all starts again the next day. I rarely take a day off.
What would you say is your interesting writing quirk?
I can’t seem to write at a desk! I write in bed. I write at the kitchen table. I write on the couch. Never at a desk though. No idea why.
Where do you get your inspiration or ideas for your books?
Inspiration can come from anywhere. Take Lust, Sex and Tattoos for instance. It is patricianly based off my own experiences in tattoo shops (I have 16 and counting tattoos) and Karen was a mixture of friends. One whom I did go with to get her first tattoo and another who left and abusive relationship and found herself and her courage after that, though she did not get tattooed in the process or have a wild night with a tattoo artist… to my knowledge! lol

What do you like to do when you’re not writing?
I like to paint and make jewelry. I am in the process of learning to make hats and fascinators. I love to read and listen to music. My husband and I are avid players of board games. I love comics and all things nerdy.
What does your family think of your writing?
My husband is completely supportive. He is the one who convinced me to give writing a go full time. He is the best fan/reader/husband ever!
As a child, what did you want to do when you grew up?
When I was young I really wanted to be an archeologist. Then I found out I have an issue with the sun (I get sick and overheated easily) and that they did not all carry whips like Indiana Jones. A part of me is still disappointed.

Buy Link: http://amzn.com/B019PONFHQ
Short Blurb:
Karen is a woman looking to make a new beginning after breaking away from an abusive past. Her first stop is a tattoo shop, to show herself that she is no longer afraid to live her life the way she sees fit and to mark her freedom with a permanent reminder to never go back. When she catches sight of her tattoo artist, Ben, well she suddenly has things other than ink on her mind. Ben is wild, free and uninhibited, everything that she wants to be and more. Soon she is left alone with the man that embodies her dreams and sparks begin to fly. It’s safe to say that she gets way more than she bargained for when she originally stepped into his shop, as Ben helps her unleash her wild child and truly begin her life again. One wild night can truly change a woman forever.
Short Excerpt:
With measured steps to try to hide her nerves, Karen followed him through the curtains and down a hall lined with tattooing rooms. She could hear the needles more clearly now and for a moment she thought of running from the shop just to escape that unnerving sound. Taking a deep breath, she continued on, knowing she could, and would do this, to prove something to herself if nothing else. Ben’s tattoo room was in the very back and away from the others who were working. She stepped in and he closed the door behind them. She was completely alone with the most alluring man she had ever met. She gulped. This was definitely going to be an interesting night.
Ben motioned for her to take a seat on the tattoo chair as he sat down on a rolling stool. “Hop on up and take your shirt off for me and lay on your side, facing me.” 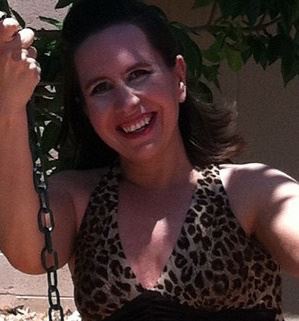 Sheri Velarde, lives in New Mexico with her husband and their two dogs.
Being an avid reader since an early age, she has wanted to be a writer for as long as she can remember. She has been writing all her life, but only recently started to actually try to pursue her dream of writing for a living. She specializes in all things paranormal and that go bump in the night. Her heart truly lies in exploring unknown worlds or adding the supernatural to our world. If it goes bump in the night or has magical connotations, Sheri writes about it.

She is constantly putting out new material with various publishers, so it is best to keep up with her on her website http://www.sherivelarde.weebly.com.

Please stop by my author page and give me a like 🙂

Reviewers, please email me if you’d like copies of my ebooks.

Here’s a little background info ( and a pic) on Ms. Sterling:

H.K. Sterling is an author with Breathless Press known for stories with imagination, intelligence, a kick, and twist endings. H.K. likes to focus her writing on suspense, science-fiction, shorts, and anything that is spicy and unexpected. Sometimes her writing may even go dark. H.K. lives in Virginia with her husband who graciously puts up with her passion for writing. H.K. currently has a Mystery/Thriller out: A Taste For Killing; and two short stories in the Breathless Press Anthology: My Bloody Valentine. Her new book, A Taste For Danger has just been accepted for publication and H.K will also soon publish a short-short titled Eyes Only. H.K.’s books are suitable for 18+. You can contact H.K. on the following social media:

Catch up with H.K. Sterling on the following media:

Check out this exclusive excerpt:

A Taste For Killing

He had six-pack abs, and I wanted to feel the carbonation. This one dressed like the stereotype of a construction worker, down to the handkerchief he used to wipe sweat off his forehead. I don’t know if he or the hot day brought it out, but sweat poured off of me too. He had no interest in me as a person, though. I was invading his territory. Still, I enjoyed the view. For my part, I knew my clothes looked crappy. I didn’t have to wear uniforms anymore, but my street clothes, well they were very—street. So there I stood, a turd in the sun in front of this Adonis. Oh well.
He pointed to a small trailer up a muddy hill. The supervisor I asked to see apparently stayed in there. Stayed, as in never left. Great. Mud. Now I’d be a dried turd in the sun. Adonis went back to digging and I started the trek up the hill. At least I came with boots. Steel toed.
Once I made it to the trailer, I heard an argument going on inside.
“Look, I don’t care who you are. The plans are publically filed. Go get them yourself!” yelled someone.
Then I heard a voice I knew. Calm, cool, subversive. “Is there any reason you’re being so difficult? A man did die on your watch.”
An encounter I hadn’t planned on. Well, at least not until later tonight. I knocked loudly on the door and with my sweetest voice said, “Hello, boys. Am I interrupting something?”
“Great,” groused the supervisor. “A party.” He appeared to me like another stereotype, puffing on a cigar over a fat jowl line and rotund stomach that threatened to overturn the small desk he was behind. I guess there’s a reason for stereotypes. He looked about four hamburgers away from a heart attack.
On a wooden chair in front of the supervisor sat Jack. A fellow independent detective, an ally at times, a competitor…and my on and off lover.
“Well, well, well,” he said smiling, but I could tell he wasn’t happy to see me. Not here. It meant we were both working the same case. “Hello, Carolyn. Who hired you?”
“Parents.”
“Girlfriend,” he answered back.
We stared at each other. Complications.
The supervisor didn’t give a damn and said to me, “Well, missy, I’ll tell you the same thing I told this guy.” He jerked his thumb around to Jack. “The plans are publically filed and that’s all I have to say about it.”
I tried a different tactic. “That’s fine with me. I have no problem going downtown for a copy.” I wore my practiced, saccharine smile. “But I wonder, could you tell me the name of the architect? Please?” I smiled again. God, this job sucks at times.
The supervisor sighed. “Jones, Evan Jones.”
“Thank you so much,” I said, smiling my best smile again. “I’ll get out of the way and leave you two boys to…whatever you were doing.”
I opened the door to go and started to shut it only to find Jack following me out.
“Sure, flash your tits and get what you want.” Boy was he in a bad mood.
“There was no tit flashing in there. Face it, testosterone was not a good choice in that situation.”
Jack’s response: a grunt.
“Besides,” I tried to placate him, “I didn’t get the plans either.”
“No, you did one better.”
“That’s assuming the architect will have anything to do with me and cooperate.” A thought occurred to me. “So are you going there too?”
“No, I might as well wait and see what you turn up. Besides, I have my own leads.”
“Are you planning to share?” Just call me hopeful. As in full of shit, because that’s where hope always seemed to lead.
“No,” he said, still grumpy.
“I see. So it’s gonna be like that.”
“I guess so.”
I felt like such a female. Damn. But I had to ask.
“Are we still on for tonight?”
“Yeah.”
I wasn’t convinced but didn’t push it. God, sometimes I hated myself. But we were good together—when it was good—when his competitive edge didn’t get the better of him. Though I was one to talk. I did the same thing at times. Hence our on and off status. But currently we were supposed to be on. So, I kept it light in the spirit of things to come.
“Okay, master detective, I’ll leave you to your leads. See ya.”
“See ya,” he replied, already preoccupied, pondering a piece of paper he’d taken from his pocket.
I made my way down the hill in my muddy boots.